Understanding the Taxation of Cryptocurrency Transactions

If you have purchased, owned, sold, gifted, made purchases with, or used cryptocurrency in business transactions, there are certain tax issues you need to know about. Unfortunately, there are some unanswered questions and little specific guidance offered by the IRS other than in Notice 2014-21 and Revenue Ruling 2019-24. This article includes the guidance from the Notice as well as general tax principles that apply.

If you have purchased, owned, sold, gifted, made purchases with, or used cryptocurrency in business transactions, there are certain tax issues you need to know about. Unfortunately, there are some unanswered questions and little specific guidance offered by the IRS other than in Notice 2014-21 and Revenue Ruling 2019-24.

This article includes the guidance from the Notice as well as general tax principles that apply.

One of the big issues of cryptocurrency is how it is treated for tax purposes. The IRS says that it is property so that every time it is traded, sold, or used as money in a transaction, it is treated much the same way as a stock transaction would be, meaning the gain or loss over the amount of its original purchase cost must be determined and reported on the owner’s income tax return. That treatment applies for each transaction every time cryptocurrency is sold or used as money in a transaction, resulting in a major bookkeeping task for those that use cryptocurrency frequently.

On the bright side, for most individuals, cryptocurrency is generally treated as a capital asset, so any gain is a capital gain, and if the asset is held for more than a year, any gain will be taxed at the more favorable long-term capital gains rates. If the cryptocurrency is being held as an investment and the sale results in a loss, then the loss may be deductible. Capital losses first offset capital gains during the year, and if a loss remains, taxpayers are allowed a $3,000-per-year loss deduction against other income, with a carryover to the succeeding year(s) if the net loss exceeds $3,000.

If you don’t understand how cryptocurrencies function here is a brief explanation.

For tax purposes, the IRS in their guidance have determined that miners are operating a trade or business and the value of the cryptocurrency earned (determined in U.S. dollars at the time of the transaction) is included in the gross income of that business. The business’ profit is treated the same as it is for any other business – taxed as ordinary income and subject to self-employment tax.

In October 2019 the IRS released cryptocurrency guidance (Revenue Ruling 2019-24) that explains that a taxpayer:

According to the IRS, taxpayers who received Bitcoin Cash as a result of the 8/1/2017 Bitcoin hard fork received ordinary income because the taxpayers had an “accession to wealth”. Further, the date of receipt and fair market value to be included in income was dependent on when the taxpayer obtained dominion and control over the Bitcoin Cash. 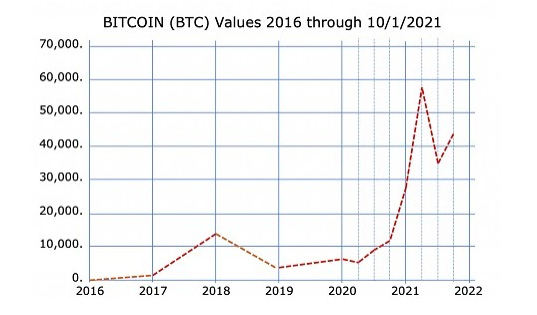 Contrast that to a well-managed business, which increases its value over time by growing the profitability and cash flow of the operation. Some notable voices in the investment community have advised would-be investors to steer clear of cryptocurrencies. Warren Buffett once compared Bitcoin to paper checks: “It’s a very effective way of transmitting money and you can do it anonymously and all that. A check is a way of transmitting money too. Are checks worth a whole lot of money? Just because they can transmit money?”

Here is some guidance that applies to specific issues:

To further the IRS’ efforts to flush out taxpayers who may have cryptocurrency reporting requirements, a Yes/No question has been included on Form 1040 asking taxpayers whether they received, sold, exchanged, or otherwise disposed of any financial interest in any virtual currency during the tax year. When signing their return, a taxpayer attests under penalties of perjury to have a “true, correct and complete” return. Taxpayers who answered the cryptocurrency question “no,” and the IRS finds that they actually had reportable virtual currency transactions, could be subject to significant penalties.

If you have questions related to your involvement with cryptocurrency, please give this office a call.