Should I Make An Estimated Tax Payment? 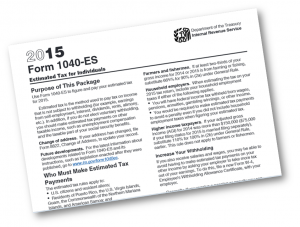 Are you required to make estimated tax payments?

Do I want to make an estimated tax payment?

Some people make their estimated tax payments regularly and prefer to overpay than to underpay or try to thread the needle and break even.  For some, the prospect of owing money on 4/15 is horrifying.  In the case of a taxpayer who regularly makes estimated tax payments, an overpayment can be applied forward in lieu of the April 15 estimated tax payment; after all, why get a refund just to write a check the next day back to the IRS.  A lot of this is personal preference.  That being said, we have discouraged using a large refund as a savings vehicle because there is a (small) risk that your refund gets delayed for a variety of reasons such as not being able to e-file or tax identity theft.

Do I benefit from making an estimated tax payment?

Clear as mud right?  Should you then go ahead and make an estimated tax payment, I can definitively say, it depends. You are always welcome to call me,  Alex Franch, BS EA , at 781-849-7200.